This is one of the most fundamental topics which you should read about while you're debugging. The topic will be far too long to write into one post so I'm planning to split it into at least two separate posts; possibly three posts if I deem that it's needed. Please note that this is a technical topic and I'm going to be discussing as much technical content as possible, and even then, we'll only really be scratching at the surface of memory address translation. We'll be looking at segmentation and its role in x86 address translation and how it is ignored in x86-x64. Afterwards, we'll be prepared to take a look at paging and why it was introduced.

First of all, we need to go back to the past - the 16-bit era - and take a look at memory segmentation. A feature which still exists today on modern processors but is thankfully ignored on x64 processors when operating in long mode. Although, before we take a look at that, it's important to recognise that there are three fundamental memory models: physical, flat (sometimes called linear) and segmented. Along with this, there are three modes of operation which the processor can be in: real mode, protected mode and system management mode (SMM).

As the name suggests, the physical memory model is just that; physical memory. We've able to write directly to RAM and there is no absolutely no protection mechanisms in place. Once we've addressed all of the available physical memory, then the system will simply crash and we'll be unable to continue.

Now, you could consider the paging model as a separate memory model, however, since it builds upon the flat and segmented memory models, I think it would be easier to refer to it as more of an extension of those memory models. It is also important to note, despite Windows using a segmented memory mode, the details of the process address space are abstracted away from the developer, and effectively the process address space of a process is flat. This is especially true when the processor is operating in long mode. We'll discuss the different operating modes of the processor in the next section.

Real Mode is first mode in which the processor is in when the computer first boots. This is before the operating system has been loaded. It implements the segmented memory model and there is very limited memory protections in place and therefore it is very easy to corrupt the system in this mode. The address space is limited to 20 bits and thus only 1MB of RAM is addressable. Now, each virtual (logical) address is split into two distinct parts: a 16-bit segment selector and a 16-bit offset. As mentioned previously, the segment selector refers to the base address of the segment and the offset is the effective address which is used to index into that segment. This is then used to map to a physical memory address in RAM.

The four segment registers are as follows:

CS - known as the code segment - contains the address of the segment selector for currently executing code block.

DS - known as the data segment - contains the address of the segment selector for the program's data.

SS - known as the stack segment - contains the address of the segment selector for the program's stack.

ES - known as the extra segment - acts as an additional data or code segment if the program requires it.

There is also the GS and FS segments which have no special meaning and are used by operating system as it so wishes. On Windows x86-x64, the GS segment is used to store the base address of the thread environment block (TEB).

These segment registers can be found in WinDbg using the standard r command.


Rich (BB code):
In addition to the segment registers which store the segment selectors, there are the pointer registers, which are used to store the effective address (offset) for a particular segment. These are as follows:

IP - the instruction pointer - contains the address of the currently executing instruction and is used in conjunction with the code segment.

SP - the stack pointer - contains the address of the for the top of the current stack frame and is thus used with the data segment.

BP - the base pointer - points to the bottom of the current stack frame and is used with the stack segment.

Now, Protected Mode is where things tend to become slightly more complicated. The segmented memory model is still used, however, paging has been added on top of this to provide additional more granular memory protection. On x64 systems, Protected Mode is extended further with the introduction of Long Mode. The key difference to note at this point in time, is that Long Mode sets the base address of all the segment registers (excluding GS and FS) to 0, which effectively, means that the address space is actually more of a flat memory model with the addition of paging. For now, we'll simply focus on the segmented aspect of Protected Mode, and will pretend that paging has not been enabled.

The segment selector is still 16-bits, although, the effective address has now been extended to 32-bits instead. The linear address is then constructed in the same manner as before, with one key difference, the base address is take from the segment descriptor and then combined with the effective address. Of course, in this case, the linear address is now 32-bits and the reason why x86 operating systems are able to address up to 4GB of RAM.

Before we continue, let's explore some of the concepts which we've described using WinDbg. The GDTR can be dumped with the r command like any other register.


Rich (BB code):
Alternatively, the base address of the GDT can be found within the PCR structure for each processor.


Rich (BB code):
The size of the table can be found by dumping the GDTL register as follows:


Rich (BB code):
Let's examine of the fields shown by the command. Firstly, the Base Address is 0, which is what we would expect on x64 systems which are running on Long Mode. The base address is like this for almost all segments as described previously. The Type field describes the type of segment descriptor and in this example, the segment descriptor is for a code segment register i.e. the cs register. The other two important fields are the Privilege Level and the Present field. The Privilege Level describes the Descriptor Privilege Level (DPL) which corresponds which ring level the segment is able to be accessed at. The Present field indicates if the segment is resident within physical memory or not.


Rich (BB code):
The first two highlighted bits indicate the requested privilege level (RPL), in this case, the requested privilege level was ring 3 or user-mode. The third bit is a flag which indicates if the selector corresponds to the GDT (0) or the LDT (1). Lastly, the final 13 bits are reserved as an index. The index is taken by the processor and multiplied by 16 (8 on x86 systems), this is then added to the base of address of the GDT or LDT respectively; depending of if the table indicator bit is set or not i.e. the selector belongs to the GDT or the LDT.

The providing expression will provide the address of the corresponding descriptor for that selector.


Code:
The segment selector can be visualised in the following diagram:

While this is not strictly related to address translation, I thought it would be worth mentioning, that the privilege levels of DPL and RPL are compared against the current privilege level (CPL) with instructions which involve CALL and JMP. This is to prevent user-mode applications from directly accessing hardware and/or executing instructions which are considered as "privileged". The CPL is stored within the code segment selector, therefore instead of an RPL, we have a CPL for segments which are code. There are more nuances and other things to be aware of, however, they don't merit discussion within this tutorial.

The first entry of the GDT always points to a null segment descriptor. This is a special entry and is used to raise an exception if a segment register is set to it and then subsequently used to access a region of memory. There is a good discussion thread which describes this behavior.


Rich (BB code):
As previously mentioned, each entry within the GDT corresponds to a segment descriptor. Each descriptor is represented by a union type called _KGDTENTRY64. This is what the dg command uses to parse the segment selector passed to it. The structure is used by the !ms_gdt command as well.


Rich (BB code):
Each processor will have it's own GDT and the easiest method of dumping the GDT for each processor is by using the !ms_gdt command, which is available by loading the third-party SwishDbgExt extension library. Here is an sample of the output.


Rich (BB code):
The first column indicates the processor number (core index), with the second column referring to the index into the GDT. It's important to also note, that on x64 systems, any attempts to modify or "hook" the GDT will result in a Stop 0x109 bugcheck. This is because the GDT is a protected structure on x64 systems.

Please note that the GDT can have up to 8,192 entries; the !ms_gdt command stops at 256 entries, therefore if you wish to see the entire table, then I suggest generating a simple script which will loop through the entire table and then dump the subsequent descriptors.

Now, we've discussed the use of segmentation within Windows and how it is used in address translation. Please refer to the following diagram which will illustrate how paging and segmentation are utilised together. In the next part, we'll be looking at paging and how it is managed on Windows. 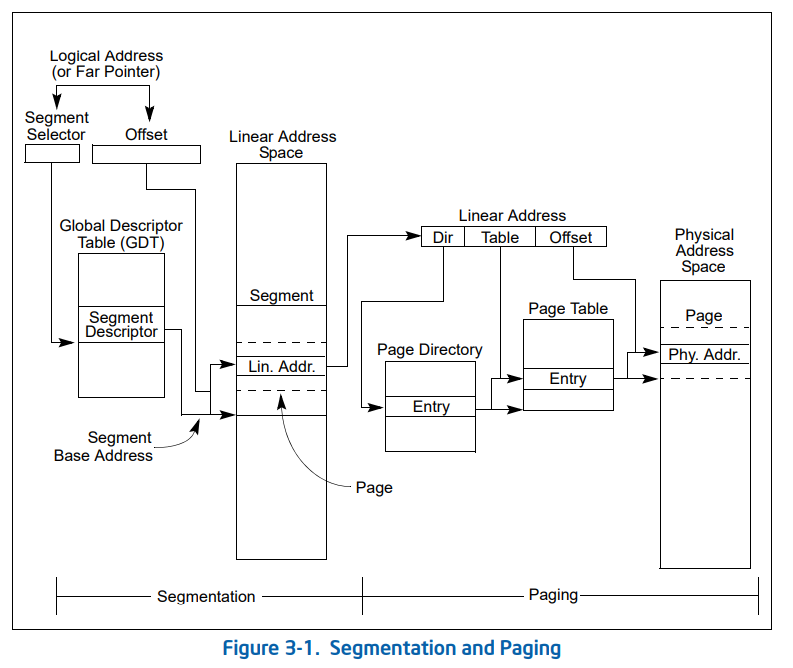