So I started working on a new interesting concept. The idea revolves around encryption and decryption of an input string through this command line utility, based on a combination of a randomly generated GUID, and the GUID set within the application's core to come out with a unique byte array based on some algorithm i'm trying to design currently. We then take this byte array, and combine it with the bytes of the input string to generate our encrypted value and save the random GUID to a file for future reference to be used when we later want to decrypt the encryption back to it's original string format.

The catch: You'll be able to freely 'destroy' (or rather recreate/regenerate) this internal GUID, so that the encryption is not it's former constant self so to speak. Thus enabling you to never again be able to decrypt anything that was created when that application's internal GUID was it's old self. 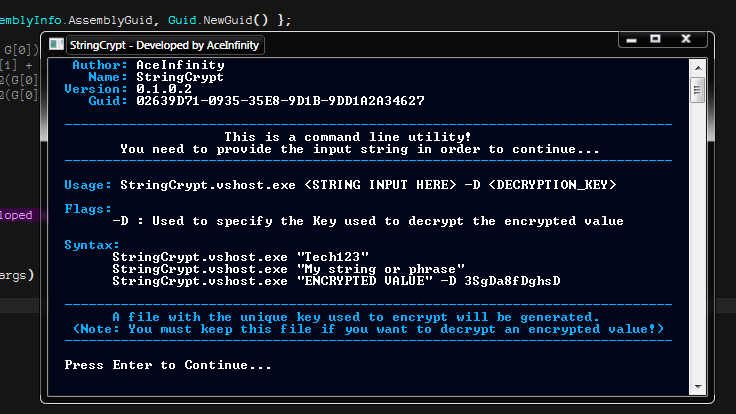 More of a concept at this point in time until I figure out what kind of algorythm I want to solve for, when encrypting the string input, and reversing that process for decryption.

This is beginning to become a fun project :) I may have to indulge in Polymorphism here to do what I've set out to do. Right now I'm trying to see if I can programmatically change the Assembly TypeLib Guid... This is going to be part of the basis for how I can uniquely give everyone their own personalized StringCrypt assembly/PE. Marshalling and using the System.Reflection namespace I can see some valuable stuff, but modifying it is a whole new aspect to this game.
Share:
Facebook Twitter Reddit Pinterest Tumblr WhatsApp Email Share Link
Menu
Log in
Register
Top