Hi Stephen, I need some help. I installed both programs, checked only Windows Performance Toolkit, downloaded dee_can.bat, ran as administrator (the key must have been found because it just kept going), and it didn't work. I tried it twice, but I got the same results:

Can you tell what I'm doing incorrectly? Thanks.

Gahhh! I've had this issue before on a client machine. Basically, xperf hasn't installed properly.

I'll get back to you tomorrow, it's getting late here in the UK.

Firstly, I see you have donated to Sysnative. Many, many thanks! We really appreciate it. :)

I'm just trying to work out why it's not working. The error you see means that, for some reason, XPerf didn't install correctly...

Let's uninstall it and try again. I just performed the exact steps I gave on my own Vista machine, and it seemed to work fine...

When you get to the screen on what to install, first uncheck every single box, then check the Windows Performace Toolkit box under Common Utilities, as before.

Check if XPerf is installed by opening command prompt and simply typing xperf. If you see a screen like this, Xperf is working: 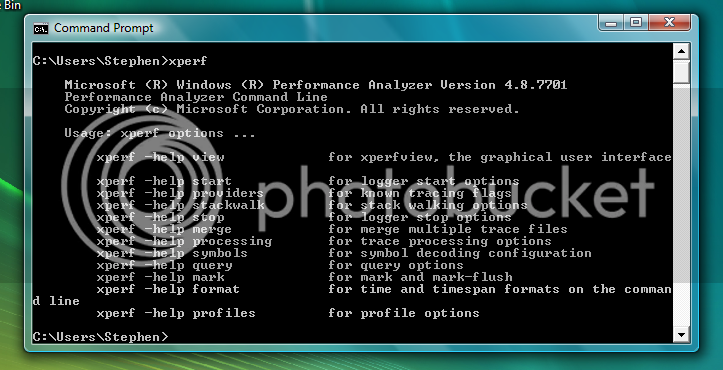 If you see the same error as before, let me know.

For a guide, if you're stuck - Dee_Can XPerf - YouTube. Watch in HD for best results! :)

Hi Stephen, Thanks for the instructions, and for putting them on youtube. The installation went fine this time, but when I 'pressed any key to continue', I got this message:

Is this warning to be expected? I have to be honest and tell you that I don't feel comfortable changing anything in the registry, if I'm understanding correctly, that is. Thanks, Dianne

Firstly, I see you have donated to Sysnative. Many, many thanks! We really appreciate it. :)
Click to expand...

My batch file should have dealt with that.

No worries, run this attached batch file as admin - it will reboot your system though - then run the original dee_can.bat file. This batch file will perform the registry mod for you - so you don't have to worry about it :)

Hi Stephen, I think we're good now... but, I have a question. The last three lines of the command are: "Capturing... Press a key when you want to stop... Press any key to continue". So, I'm a bit confused on the last two lines, ie. if I press a key will it continue or stop? Thanks.

Ahh, that's due to a limitation in batch files. The "press any key to continue" is programmed into the syntax of the language.

Fingers crossed that there are some useful results:

Still looking at the XPerf log, may be a little while.. :)

In the meantime - just try this:


Microsoft said:
Hardware acceleration is a new functionality of Internet Explorer 9 that allows Internet Explorer to move all graphics and text rendering from the Central Processing Unit (CPU) to the Graphics Processing Unit (GPU). In some cases it’s necessary to enable or disable hardware acceleration to check for hardware or software compatibility issues with viewing certain internet websites.

To re-enable hardware acceleration, follow the steps listed above and uncheck the Use software rendering instead of GPU rendering check box.
Click to expand...

After following the steps in the above post, could you please try using internet explorer with a wired internet connection. I am assuming you are connecting to the internet wirelessly (aka, over WiFi). If you are, could you physically connect your computer to your router with an ethernet cable and use IE to see if it crashes.

The Xperf logs have been interesting, so thank you for those. The hard work was useful :)

After following the steps in the above post, could you please try using internet explorer with a wired internet connection. I am assuming you are connecting to the internet wirelessly (aka, over WiFi). If you are, could you physically connect your computer to your router with an ethernet cable and use IE to see if it crashes.

The Xperf logs have been interesting, so thank you for those. The hard work was useful :)

Hi Stephen, I followed the steps to disable hardware acceleration last week, and it didn't make any difference. I'll try a wired connection and let you know how it goes. I have to find an ethernet cable, first. : P Thanks, Dianne
D

OK, I tried connecting to the router (and turned my wireless off on my laptop?) and I wasn't able to connect to the internet. The connection icon said it was connected to an unidentified connection, local only. So I unplugged the router from the desktop computer and plugged it into my laptop, and I got the same result. Am I doing something wrong?

Reboot the system and try again.

Then get me an IPConfig output please:

1. Open a command prompt
2. Type ipconfig
3. Right click -> Select All
4. Press the Enter key
5. Paste it into your next post

OK, it worked this time, after re-booting. Thanks Stephen.

I used the computer, wired to the router (with the wireless shut-off my laptop), for about 10 or 15 minutes, and didn't have any problems at all. I should probably use it a bit longer, though, just to be sure.

I disconnected it from the router and turned on the wireless switch to see how it would act, and it worked fine until the laptop completely shut off a few minutes later. I thought it might be the battery, since my battery is ~2.5 years old; so I plugged it into the laptop adapter and turned the computer back on. The battery icon showed it as plugged in with a 97% charge. This (generic?) battery has been great, btw - it replaced the original (not-as-good) Toshiba battery, and has been A-1 all this time. So, the reason my laptop turned off may not be the battery? I don't mean to bring another problem into this, but it just makes me wonder if this has anything to do with it. And just to clarify, I had unplugged the laptop from the adapter, brought it to another room where the router is, and used it battery-powered, to do the experiment with being plugged into the router. That is when the laptop shut off, after about 15 minutes, or less.

Another thing, after I plugged my laptop back into the adapter, I browsed for maybe 5 minutes to see if it would hang, and it only did so one time. The page eventually opened after a minute or so, though. A 'Report Problems and Solutions to Windows' message popped up (following the hanging incident I just mentioned), so I clicked on it. This was the reported problem for this incident:

I'm beginning to think maybe there isn't anything drastically wrong...
Click to expand...

Forget I said that, IE crashed again. I get spurts where the computer isn't working... terribly bad; then it starts crashing again.

I'll get back to you properly later, but is it better or worse when wired compared to wireless?
D

Tekno Venus said:
I'll get back to you properly later, but is it better or worse when wired compared to wireless?
Click to expand...

It seems to be better wired than when it's wireless. I tried it again a short time ago, and it didn't crash. It did shut down again, though, when unplugged from the adapter. I could bring my adapter with me... ha. I'll try that.

Sorry for the wait - I've been helping to deal with an influx of threads in the Windows Update area! Sorry once again!

Anyway - I've been speaking to some other staff members in here and have something to try.

Please follow the steps here to change your DNS server to OpenDNS. Please make note of the settings that were there before (maybe take a screenshot) so you can revert back if it doesn't help. Use OpenDNS

Hmm... oddly, my computer seems to be working better the last few days - pretty fast, no hanging. Knock on wood. The only changes I've made during this time were to do some Windows updates. I'm going to hold off on the last instructions about changing the DNS server, and see if my computer stays the same. I'll let you know, though. Thanks, Stephen.
Share:
Facebook Twitter Reddit Pinterest Tumblr WhatsApp Email Share Link
Menu
Log in
Register
Top