Another RAM diagnostic tool, memtest (without the + symbol suffix) has been recently updated and we now recommend its use instead of memtest86+.

Run the boot version of Memtest86+. Let it run for at least 7-10 passes (preferably more) or until errors show up.

A helpful post from Tekno Venus for steps to create the bootable Memtest86+ media and run it: how to burn memtest86+ to either a CD or USB drive.​ 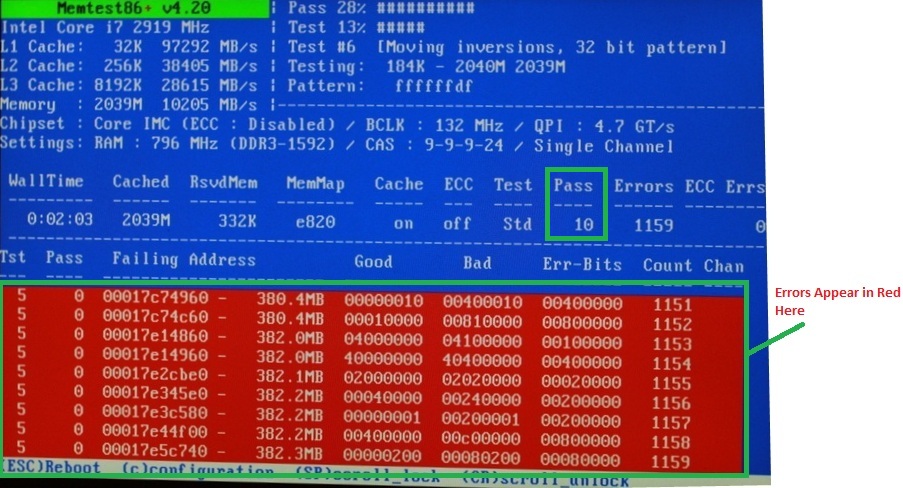 If you see even one error, stop the test and do the following:

Some of the best information provided by a user who had RAM problems that were difficult to track down:


CaptainDju said:
Okay, finally got the new identical RAM kit delivered, and had time to run some tests, I think the conclusion is indeed a faulty RAM kit:

First I ran a positive control test where I reset the BIOS settings to Auto for all items I had changed in a previous post, and re-installed the faulty RAM in the A2-B2 slots
--> Crashes as frequent as before, as expected

Then I placed the faulty RAM in the A1-B1 to see if it could be a faulty slot (mobo) issue instead
--> Crashes as frequent as before, consistent with the faulty RAM theory, but does not rule out the faulty mobo

Third step was to remove the faulty RAM and install the new RAM kit in slots A1-B1
--> Not a single crash in a total of 10 hours of gaming, where I used to have crashes every few minutes. Still consistent with the faulty RAM theory, but does not rule out the faulty mobo

Last step was to move the new RAM to the A2-B2 slots to test them:
--> Not a single crash in over 18 hours of gaming/intensive use.

So in conclusion I think it is safe to assume the mobo is fine and the old RAM kit is faulty, so I'll send it out for replacement.

Here are my lessons learned on this one:

- Even though everyone hopes for a quick fix, ALWAYS perform test steps one by one (e.g. remove ONE supposedly faulty component and test right away). If you change multiple things and the issue is resolved, you won't know for sure what actually solved the issue.

- MemTest results are definitely not 100% accurate unless you leave it to run long enough. I think it's pretty safe to say that running it for less than 10 passes is worthless.
Note that even with enough successful passes (20+ have been advised) it does not replace real-life situations a.k.a. whatever you usually do on your computer that makes it crash.

- If the component you're suspecting is plugged in the motherboard, don't rule out the possibility that the motherboard itself is faulty, ideally have a negative control test with another similar component that is known to work fine

- RAM issues are a pain to diagnose as you can easily have false negatives as I have had. Also there's nothing you can do with your computer without RAM

I'll mark this one as resolved, hopefully it can help other people.

Anyway, thanks a ton for your super fast follow up and very knowledgeable answers.

TL;DR: The RAM was borked in the end, tadaaa
Click to expand...

Administrator, .NET/UWP Developer · From Colorado
My name is Mike.

For those who need a iso burning program imgburn is a good choice and simple to use http://www.imgburn.com/ and if you need guides for anything on it they have a extensive list here http://forum.imgburn.com/index.php?showforum=4

Memtest86+ v5.0.1 has been released. Procedure for testing RAM is still the same, but the positioning of some on screen information whilst running the test has changed slightly.

I'll need to update my canned reply, thanks for the info!

I tested my RAM using Memtest86+ last night and this was my first time using version 5.01. There is one thing I would like to note about this release.

It seems there is a bug with v5.01 with regards to the newly introduced Multi-Core (SMT) testing. This is a feature designed to dramatically speed up test times by using all the cores of the CPU. Normally, memtest86+ only uses a single core, which makes it quite slow. By using the many cores available in modern processors it can cut this time.

To enable this SMT mode, press the F2 key within a few seconds of booting into Memtest. If you do not press this, Memtest will resort to 'Fail-Safe' mode, where it will work the same as it always has.

However, this new feature has an issue. It seems to crash whilst performing Test #7. Whilst this doesn't affect all systems, users are reporting it to affect quite a few. There are a few posts on the memtest forum:

Firstly am I supposed to force SMT? Memtest86+ seems to think my PC is single core otherwise.

Secondly, after choosing SMT, the test freezes less than two minutes in. The few blinking symbols on-screen keep blinking, but the timer freezes, and the program doesn't respond to keypresses...

In case this is important: I installed MT86+ to USB from my Windows 8.1 computer using the installer.
Click to expand...

With SMT disabled, it passes all the tests.
With SMT enabled, the tests proceed at warp speed and freeze at Step 7, just like norwoods above.

False positives given whilst running in SMT - v5.01 gives errors in multi thread mode, but not in default mode

So I recommend NOT using SMP mode until a fix is made. Just let Memtest run as normal.

NOTE: Windows 8, 8.1 systems - if you have UEFI Bios with Secure Boot, it must be disabled/turned off to allow an OS other than 8/8.1 to boot.

I have a shot of the 5.01 version with labels for each entry. I get no option to choose it from Upload from Computer.
D

So what do you do if MemTest doesn't see your USB stick, but the rest of the system does? I tried, but it won't offer me the USB, only a multi-reader and a virtual drive...

Can you clarify your statement, IE are you trying to run memtest from a usb drive to check ram. If so this might be of some help windows 7 - How to create a bootable Memtest86+ on USB flash drive? - Super User
D

Not sure how I can clarify? I am trying to make a bootable flash to run this test with. I stick the drive in, Windows pops up autoplay, and every other program I fire up sees the flash drive, but Memtest is offering two drives that don't even have devices attached to them, a virtual drive that is unmounted and a slot in my multicard reader, which has no memory in it. It won't offer me the drive that has an actual flash drive in it.

That is what the link I posted is for, you may have an incorrect file, there is one specific to installing on usb.
D

No, I have the right file. Seems Memtest doesn't like big Sandisk drives (according to that link you posted), which is what I have.

Yes, that is the one I have.

I asked the neighbor, and she had a Sandisk too, but hers was only 4gig, and that one will/does work - I have made the disk and started testing, but will have to actually run it later tonight.

My best suggestion is try it on another computer and see if it will get recognized.

This is how I normally do it.