No more ads in Firefox Tiles - A new hope

For the past three or four years, I have been one of the unhappiest Firefox fans. Even since the parent company decided to ape Chrome, it went downhill. A steep slope full of rusty metal spikes, mines, bears, wolves, dragons, trolls, acid, and death. One bad news after another.

Now though, something really good has happened. Mozilla has officially announced they are going to remove advertisement from the Tiles. If you're wondering what this is about, we're talking little thumbnails shown in a dial-like fashion when you open a new tab. If you have blissfully missed all the drama, I have a bunch of articles that can help you get up to speed. Good news, indeed. So let's elaborate. 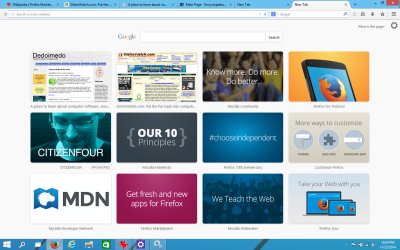 The decision to remove ads from the Tiles is a bold one. It signifies a shift in policy, and even though it may be based on monetary considerations, it is still a big win for the hardcore loyalists. Because it shows the user might be coming to the forefront once again. And when that happens, great things are about to start. Sure, the announcement to split Thunderbird development off the main branch is a sucker punch, but we need to wait a little longer on that one.
Click to expand...