The long-awaited Malwarebytes Anti-Malware Version 2.0 has been released! 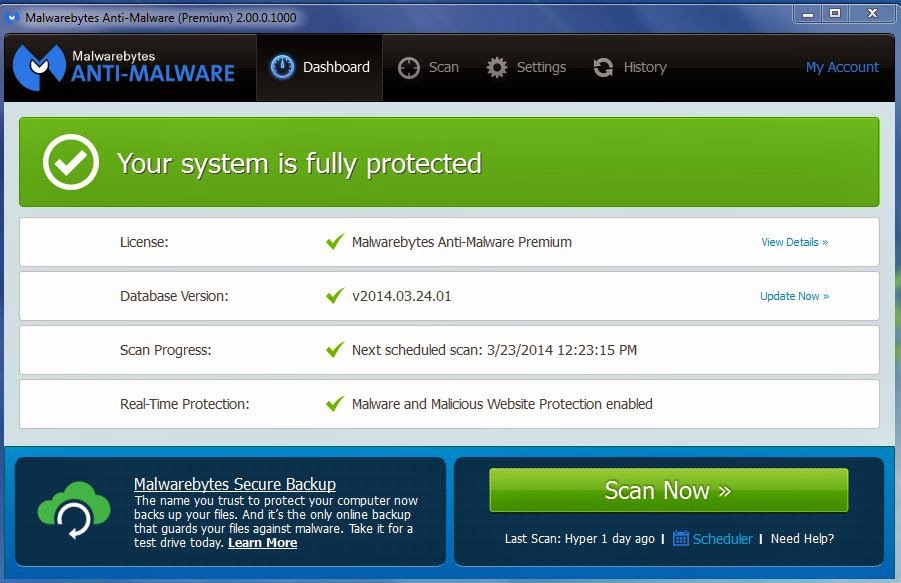 Highlights of the changes to MBAM Version 2.0 include the following:
Subscription Licensing Model

The free version of MBAM continues to be available. However, with the launch of Version 2.0, comes a move to a subscription licensing model, $24.95 per year for three (3) computers.

This change is due to the high popularity of MBAM resulting in the need to cover costs in bandwidth, hosting fees, infrastructure, salaries of researchers, QA department and more, which have grown immensely.

It has also been announced that a few thousand more lifetime licenses will be available soon as a special offer. See Marcin's announcement at Malwarebytes Unpacked, Malwarebytes Anti-Malware 2.0!.

here's the link if anybody else has any trouble.....

Thanks, bassfisher6522. I've added that along with a link to the FAQ's and the Press Release to my blog post.
P

Woah, the new UI is gorgeous.

Following is the definition of the renamed, which I should have included previously:

Threat Scan is the primary scan to choose because in almost all cases it catches all malware that a "Full Scan" would in less time. It scans for threats in all of the locations that malware likes to hide on your system, and ignoring places that it doesn't.

This was renamed because with the word "flash", it can be implied that this scan will search flash memory devices such as flash drives/thumbsticks, which it does not. This type of scan primarily searches for malicious processes that are currently running in memory. Because it takes less time to perform than a Threat Scan, it was renamed "Hyper Scan" to avoid the confusion with "flash".

A custom scan can be used to perform a full scan, that is, scanning every file and folder on every drive connected to the system. However, that's not its only function. A few specific directories can be selected as well instead of simply scanning everything.

I just found out about the new online help file for version 2: Malwarebytes Anti-Malware 2.0 Help Documentation.

Yes, the new UI is great! Takes a bit of getting used to for new users but it is drop dead easy too, so once they get used to it being different from what they are used to, they should be fine!

Anybody get a version update...mine did, I'm now running version...2.0.1.1004. It updated itself and I had to go through the whole install process again.

Somehow I didn't update at first, thanks for posting!

As much as I like MBAM, the new interface reminds me slightly of registry cleaners especially the "Fix now!" aspect, which is unfortunate. Other than that, the new version looks good!
P