In highschool I wrote scripts and developed my own client for RS netting >$1,000 off the game before I finally quit

Good times but so many hours wasted.

"Time you enjoy wasting, was not wasted." - John Lennon

I spent a good few months getting 99 Firemaking, that was such a long process for the sake of a skill cape and a maxed out skill!

I used to play Runescape years ago (must have been 08/09) - was never any good at it though Never bothered paying for membership. I remember having not being able to play on high details because it would cause my laptop to crash

I'm about the same, never touched the newer graphics either, classic was the best

Can't find any newer screenshots than this one sadly 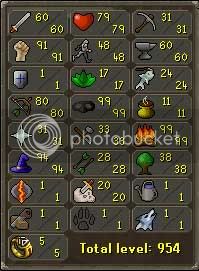 A screenshot I found that made me sad:

I doubt any of you know of kbot, it was a bot client I was on the development team on for ~ 2 years before we shut down due to legal harassment. The whole api was based around color/pattern matching instead of hooking into the executable to run scripts. This made it pretty much completely undetectable and helped my programming skills quite a bit :)

^^^^
That kind of color/pattern matching is possible for Clash Of Clans as well, right?

blueelvis said:
^^^^
That kind of color/pattern matching is possible for Clash Of Clans as well, right?
Click to expand...

Yes, it started out as a container for flash games that we adapted to work for runescape(compiled java game)

It was supposed to be the perfect bot client. :noidea: