I've just noticed today that my laptop battery won't charge past 54% - I unplugged power just now to run it off battery and got it down to 53%, the message now reads "Plugged in, not charging". After a few minutes, the laptop has actually started charging again (Getting back up to 54%, not sure if it'll get any higher but I'm not expecting it to.)

I'll take a guess and say the battery is dying - any way to check? Any other problems that could cause a similar issue? Don't particularly want to spend money on a new battery, but I pretty much always have the laptop plugged in anyway. If it's plugged in, does it matter if the battery completely dies?

How old is the battery?

Unplug it and run down to below 20% see if it charges back up ok.

Most laptops can run without issue being plugged in all the time.

Laptop is approx 4 years old, the battery has never been replaced. I'll run it down and see what happens. (It's an Alienware M15x, so to get down to 20% should take about 10 minutes. :r1:)

I would be leery of it only because it was about 4 years ago that Dell and several others had the battery fire issue wasn't it?

Think that was in 2006 - at least Dell had a large battery recall in 2006. If its dead I'll just keep it plugged in, I normally do anyway. The price for a replacement is a bit too steep at the moment; the max battery life for this thing is only about 1 hour anyway, so I never really use it unless it's plugged in.

It went at least until 08 th wife's XPS M1530 with the large cap battery was included and it was from 08.

Just be aware it, you know what to do if the battery starts getting too hot all the time.

I don't ever have the battery plugged in, I run the laptop straight from the mains, it places less strain on the charger and helps to lower the temperature slightly too.

It would be worth checking the voltages and wear level on the battery to see what kind of levels it is reporting. HWMonitor shows these values: CPUID - System & hardware benchmark, monitoring, reporting 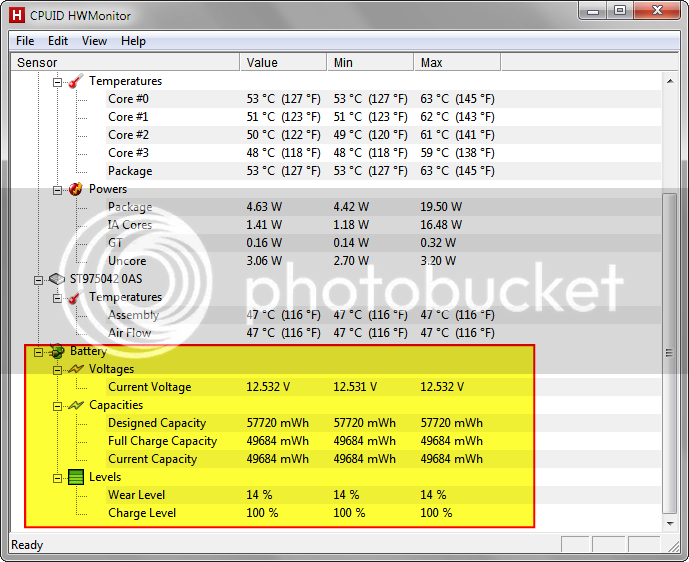 Does the BIOS of your laptop report any battery info? Does the info there match with what Windows is saying?

x BlueRobot said:
I don't ever have the battery plugged in, I run the laptop straight from the mains, it places less strain on the charger and helps to lower the temperature slightly too.
Click to expand...

Unfortunately, not all notebooks allow you to run without a battery in circuit. But even so, because there is still electro-chemical activity going on in a battery sitting on the shelf, a battery can still go bad or grow old and die while doing nothing.

I agree that it puts less strain on the charger, but a charged battery draws very little current anyway. And charging a fully discharged battery is what the power supplies and charging circuits are designed to do.

My nearly 4 year old Toshiba notebook (with battery installed) is connected to the charger/power supply nearly full time. I don't worry about running the battery down to 20% or 7% or any percent. Periodically, I simply run the battery down until the notebook's power management routines say, "enough!" and force the OS and notebook into hibernation (to save any open docs) and shuts downs. That's rock bottom. Then I charge it up.

Modern batteries don't suffer from memory effect like old NiCd, and nearly as old NiMH batteries do, but new research has found that modern lithium-ion batteries suffer from memory effect too. They gradually lost their maximum capacity if repeatedly recharged after being only partially discharged. The batteries would "remember" the smaller capacity as being normal. So period "deep" discharging and charging is still a prudent practice, and running that battery through a few deep charging cycles is what I would do to see if some of the capacity can be recovered.

That said, I agree with x BlueRobot that heat is a concern and deep charging can surely generate some heat. So ensure vents, bays, recesses and cavities are clean of heat-trapping dust and there is lots of free space around the power block.

Still, batteries die and need to be replaced. Dell reports battery runtimes degrade after just 18 months and recommends replacing them when, "the run time does not meet your needs".

Thanks for the information, I remember being taught the memory effect within physics in like Year 7 at school

I notice the CPU is getting a little hot at the moment as well. Needs cleaning, and the current hot weather isn't helping.

@Digerati - how often do you let your battery run all the way down? Does doing so improve the battery life?

@Digerati - how often do you let your battery run all the way down? Does doing so improve the battery life?
Click to expand...

Probably once a month (if I think about it) with my current (nearly 4 year old) notebook and it's LiIon battery. As far as improving battery life, that probably depends on which expert you talk to but I am in the camp that periodic deep cycling does improve battery performance and life. And every notebook manual I have read recommends deep cycling every so often - to "prevent damage".

My Toshiba simply says to "periodically" fully discharge, then fully charge the battery.

For sure, with NiCad and to a lessor extent, NiMH batteries which do suffer from memory effect, deep cycling for longer run times and battery life is essential. Fortunately, most notebooks today use LiIon. Some may use NiMH, but I think all NiCads have been phased out.

One of the problems I have with cleaning the laptop is to get to the CPU Heatsink and fan to clean, the entire cooling unit needs to come out exposing the thermal paste. I reapplied the paste last time I cleaned the laptop, but I'm always wary of accidentally damaging something.

That's exactly what I don't like about the notebook industry in general. For one, there is no industry standard like the ATX Form Factor standard PC (and PC parts) makers have all agreed to comply with and second, notebook makers (or their bean counters) are so motivated to create the thinnest, lightest notebooks possible, they totally ignore any maintenance (notably, preventative maintenance) concerns. And regular cleaning to prevent and remove heat-trapping dust is ESSENTIAL preventative maintenance.

I reapplied the paste last time I cleaned the laptop
Click to expand...

Note you should thoroughly clean and apply a "new" layer of fresh TIM (thermal interface material) every time you remove the HSF assembly. TIM cures after a few heat-up/cool-down cycles and should never be re-used once it has begun to cure.

Yeah - last time I did it I completely cleaned the old paste with ArctiClean Thermal Material Remover + Purifier, and put a new layer of Arctic Silver 5 on. I did everything I could to prevent any damage, and ensure the paste was applied correctly, but I don't like having to expose sensitive parts like the CPU. Having to re-apply the paste regularly also introduces the possibility of dust and air bubbles being trapped in the paste - anything else I should consider when having to re-apply?

Right. I don't blame you. Not only is there the risk of physically damaging the chip, the socket, the mounting mechanism due to mishandling or a simple slip, but the risk from ESD damage every time you come near ESD sensitive devices is very real, and great too. You ask what more you can do - being very ESD aware and taking necessary ESD prevention cautions is the main thing (besides ensuring the power (AC and battery) is disconnected first).

As far as dust in the TIM, you just need to be quick mounting the heatsink after applying the TIM. I blast a quick shot of compressed dusting gas on the mating surfaces before applying the TIM. There should not be any bubbles. The best heat transfer occurs with direct metal-to-metal contact between the CPU die and the heatsink mating surfaces. The purpose of TIM is to fill in (push out the air) the microscopic pits and valleys in the mating surfaces. Any excess is in the way and counterproductive to the most efficient transfer.

See my sticky, Thermal Interface Material for more information (we can "stick" this here in this HW forum at Sysnative too - if it is felt it would be beneficial to others).

Thanks for the info, I'll follow that thread closely when I clean the laptop. We'd be happy to have it here - I do think it would be beneficial to others to have up.

The first time I cleaned the laptop, I didn't realise the whole unit came out and accidentally exposed the TIM - I didn't have any to hand, but I quickly bought some and re-applied the paste a few days later. I would like to avoid having a laptop in the future, at least not as a main PC.

Digerati said:
See my sticky, Thermal Interface Material for more information (we can "stick" this here in this HW forum at Sysnative too - if it is felt it would be beneficial to others).
Click to expand...

How about in the Hardware Tutorials forum?